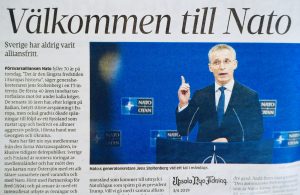 I must admit that I have been interested in international relations since I was a teenager. I remember my very first transatlantic flight I made alone. I was just about to turn 18. Since I was travelling alone I was nervous, but I was told not to be afraid since it was a direct flight. The plane started at Arlanda airport, landed in Oslo, Gardemoen, to pick up some more people, and from there, then directly to Miami airport. I just had to stay in the plane when I was in Oslo. I was lucky because I sat next to a girl in my age. She had her little brother with her. They were also travelling alone and we thought that it was rather fun, and also scary. They didn’t know either what to do when we were going to land in Miami. Passports and that kind of stuff. We were going to keep company til customs. It was a long flight but we enjoyed watching movies and chatting. The flight attendants liked her little brother. Miami airport was very busy so we lost each other. I wonder what they do today, if they remember this flight.

This weekend has been dedicated to various food. Spanish, Italian and Swedish cooking. I have dined with present colleagues and also, I have met pharmacy friends with whom I studied with at Uppsala University. I was interested in international relations and I was an active member in “Internationella utskottet” (international pharmaceutical relations for students). We arranged student exchange between pharmacies in various countries, among other activities.

Yesterday was election for the European parliament. I did my voting, but I don’t know how many voted. According to the radio, more people vote compared to previous elections. I believe Europe is approaching independence. But that will take time since it is a matter of human development. Remember that the world war two ended not so many years ago. In 1945. Sometimes, I find interesting writing in newspaper and I found the headline above two months ago. An interesting conclusion, and so true, is that Sweden has never been neutral. This year NATO is celebrating 70 years, with a big party. In brief, 40 years of cold war and then conflicts on Balkan. Russia not to be forgotten, and that is why NATO is interested in having Georgien as a new member. For the stability in the region.

To conclude, Stoltenberg must have a huge desk filled with paper work to maintain stability. His main goal and purpose. I hope. At least for generations to come.