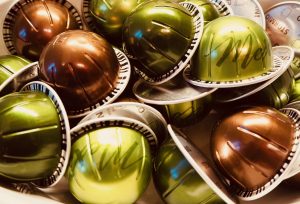 When I was on Cuba a few years ago I met an Italian couple. Since I stayed at a little cuban island (Cayo Levisa), there was not much to do but talking to people, enjoying sun and cuban cooking. We talked about coffee. I have a lot of tea, but sometimes it is good to have a cup of coffee. I like rather strong coffee. I don’t know why, but I have remembered the recommendation from this couple: Nespresso. During the tough months with my mother’s passing away I needed something strong, so I bought a coffee machine instead of going to cafés. That actually helped me.

This coffee has made me think of Italy, and also inspiration for my next book. I have a little project infront of me –  I will learn more about Italy. At high school my family went to visit my aunt in Florida. I missed time at school and I remember I had to write about the Roman Empire. I did quite a lot of work, but unfortunately, I don’t remember much. However, I do remember something about Hannibal and elephants in the Alps. I definitely have to refresh my memory. Pyrric Victory was also something I learnt. The Romans also had some kind of transportation system of water, namely aqueducts. At that time, it was very impressive, and also is today.

Yes, architecture is something that impresses me. That is why I always feel sad when an old building is removed and replaced by a new construction.

I ended this day by having a cup of coffee. After that some rest, collecting energy for running which I did later. A warm and beautiful evening.