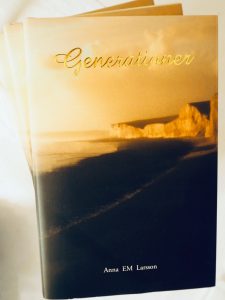 When I moved from Norway to Sweden, it was mainly to stay closer to the place where I am grown up. I have noticed among friends that it is rather common to return home at my age. To study in the teens, move from home, discover the world by eg travelling and other adventures, and then move closer to parents. In 2010 when I returned, my mother had started to show memory loss. This last decade has been rather tough for me and my family since Alzheimer’s disease is affecting family and relatives.

Unfortunately, I am not into neuroscience research anymore. But, during these years I have thought a lot about how to help within Alzheimer research. Theoretical research instead. I started to write, and my book “Generationer” was finally printed last year. There is a genetical component contributing to the disease. However, it should be noted that most probably, genetics is not the only factor contributing to developing memory deficiency. It is a complex interplay between genetics and environment. You can carry a vulnerable gene, but the disease will only display if you are exposed to a certain milieu.

So called gene scissors are available today. Currently, there is a lot of information available about CRISPR-Cas and gene therapy where methodology has made huge progress during the last decade. CRISPR stands for Clustered Regularly Interspaced Short Palindromic Repeats. With genetic scissors it may be possible in the future to permanently modify genes in living cells and organisms to correct mutations at precise locations in the human genome in order to treat genetic causes of disease.

Of course there are many ethical aspects to consider before experimental attempts. Harper JC and Schatten G asked this important question in a review.

Slow, slow progress is needed since we are talking about the human genome, but it should be emphazised, to see somebody close suffer makes me want to contribute to more understanding. I end today’s writing with some music. Music is definitely good for the brain.