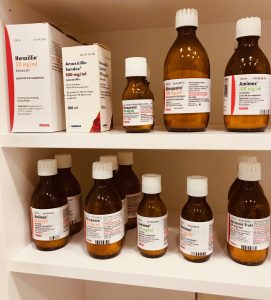 This morning I went to a lecture held by Swedish Ministry of Health and Social Affairs. It was on actions how to prevent further development of antibiotic resistance. Antibiotics are medicines used to prevent and treat bacterial infections. Antibiotic resistance occurs when bacteria change in response to the use of these medicines. Bacteria, not humans or animals, become antibiotic-resistant. The antibiotics become less effective.

Most bacterias are classified into two different groups – Gram-positive (purple) or Gram-negative (pinkish or red) – depending on a specific stain color which can be seen in a microscope. The Gram stain test was developed in the 1800s by the Danish bacterologist Hans Christian Gram.

Examples of Gram-negative bacteria that have demonstrated drug resistance include:

This means that people may die, even though there is antibiotics available. Therefore, antibiotics should be used with caution. It should also be noted that people die due to no access at all to antibiotics. It is indeed a complex subject. The work against development of antibiotic resistance is also at a political level. Governmental action is taken, and bilateral collaborations are supported among various countries. The UN is also involved.

The WHO has many suggestions how to work on prevention. What can we do?

5) use safe water and raw materials

Certainly, there are more advice how to prevent infections, maybe you can help me.